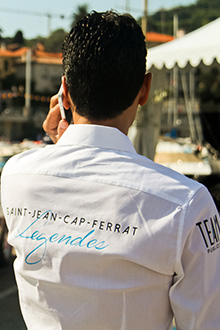 September 27th and 28th 2014, D-day for Marc Gallon creator and designer of  « Saint-Jean-Cap-Ferrat Légendes », an adventure prepared with passion and doggedness for months now. Marc is surrounded with his team from Team Publicité, white shirts and blue logos in the colors of the event.Saint-Jean-Cap-Ferrat is ready to play the role which we expect from it, to become the time of a weekend the world capital of  the most illustrious automobile marks. If a fairy had shaken her magic wand to order a perfect weather She couldn’t  do better. Cameo of blues, azure of the sky and the sea, hidden turquoise and white tents  around the marina. Under these short-lived shelters are revealed of exceptionals vehicules come from four corners of the world, the touches of colors of sparkling bodies contrasting in the background with whiteness of boats. Those 25 sublimate creatures of another  time, perfectly maintained, brilliant as stars, are in the running for the elegancy competition in several different categories :

In front of them, on the quay of the old port of the peninsula, 80 other magnificence , pride of collectors having agreed to expose them for the great pleasure of 2000 visitors came to admire them. 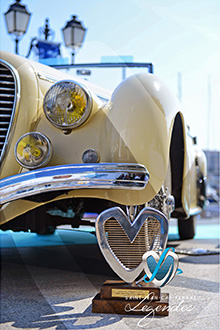 The event promises to be magnificent.

The Prestigious champagne Ruinart, Partner of the demonstration, offered to the exhibitors and to the members of the jury on the terrace of the Voile d’Or hôtel, stratégic place which allows to see the fairy painting of the peninsula. In the beginning of the day, serious things began on the big pier where 6 members of the jury were settled with their président Jacques Braneyre, a referend name in the élitist world of old vehicules. The parade of the first international elegancy competition of Saint-Jean-Cap-Ferrat can begin. The 25 vehicules parade by series of five in front of an attentive and professional jury. Saint-Jeannois and tourists are dumbfounded in front of the quality of the proposed show. As in the < strong >belle époque of the roaring twenties, each crew in full dress uniform fate of the vehicle and pose for the photographers. The flashes crackle, the applauses and the shouts of admiration come from all sides after the presentation, and the history of the vehicle, expressed by another big name of the sports journalism, Pierre Alain Dupuis. The crew restarts then for the second parade in the city of Alpes-Maritimes before getting back to their attributed place looking forward to the results. The prize list was announced during the gala which combines the participants and the prize-winners in the room Neptune of Saint Jean’s city hall. A favorite price is a Lancia Astura of 1939. The prize for being top of the form of this first elegancy competition d « Saint Jean Cap Ferrat légendes » was granted to Delahaye 135 MS of 1947 driven by French Alphonse Guilloré.